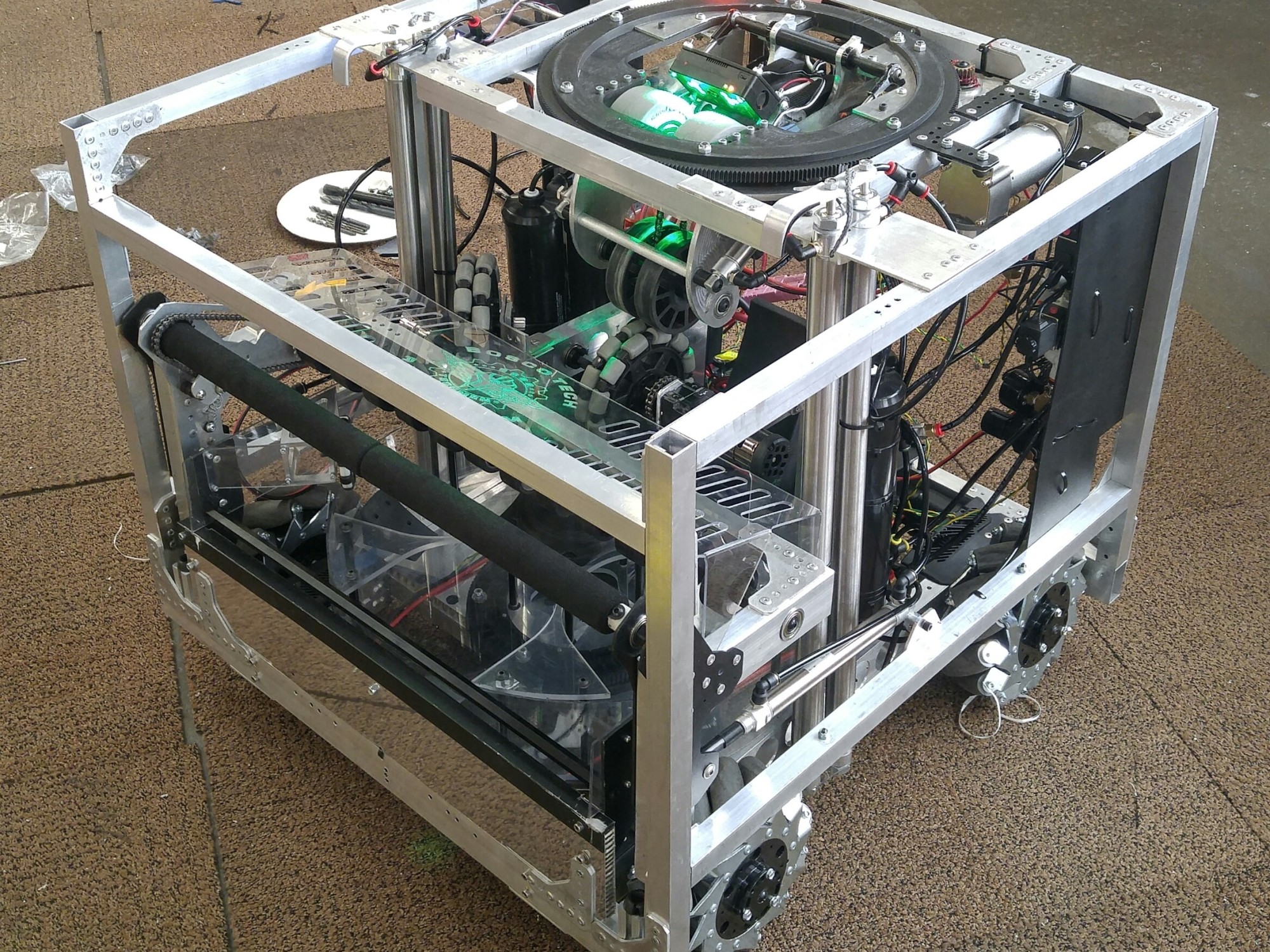 Visit the following link if you are not already familiar with the FIRST organization or FRC: https://www.firstinspires.org/robotics/frc

During the 2020 FRC season at Bosco Tech https://www.boscotech.edu/ I had the duties of Team Captain, Lead Engineer, and Driver. This post will cover my part in the Bosco Tech FRC team for the 2020 year.

This season we did many new things. This is the first year we had a custom frame, custom gearboxes, an automatic deployable adjustable shooting turret, a functional pneumatic lift system, and an indexing system. Even though we had 30-40 members actively participating that year, most of the work on the robot itself was done by only a few people since almost all of those members were completely new and hadn’t even gone through an FRC season before.

For the robot this year I designed all five custom gearboxes (4 in the drivetrain and 1 in the turret), the base and frame (the aluminum square tubing which makes up the outer structure), all designs of the automatic deployable adjustable shooter turret (the thing on the top of the robot which shoots the balls), the semi-final indexer design (the revolving thing in the center of the robot which indexes and stores balls then shoots them up into the turret), and the final intake design (the thing that deploys and loads balls from the floor into the indexer). When building the robot I did some of the manufacturing, all of the pneumatics, some of the electronics, and much of the assembly. I was also the primary competition driver for the robot. Quite a step up from just designing and building the wheel arm thing on the 2019 robot https://alejandro-pina.com/2021/02/19/first-robotics-competition-2019/.

Outside of making the robot I also coordinated with the Associated Student Body (ASB) to have the robot show off in a sports rally. The sports guys weren’t all that thrilled about it but the majority were and so the robot stole the show. Unfortunately no video was taken of this event so I’ll do my best to describe it. During the rally there was a dodgeball game. They used the balls that the robot was designed to use, so if a ball went out of bounds the robot would go pick it up and shoot it back. The robot also shot some balls into the crowd which got the students excited. But what really got the students excited was when the robot scored some shots up into the basketball hoop. One of the faculty members came up to me after the rally and said that the cheers from when the robot scored those baskets were louder than they had ever been for a long time.

And besides that, I don’t have much more to say about the 2020 season. It was cut short due to covid which means we weren’t able to completely follow through with the season (we had a lot more planned). But despite that, it surely was an excellent learning experience!